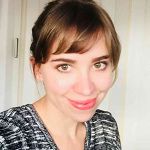 After graduating from high school in 2010 Elena went to Preparatory school (a 2 year intensive preparation for competitive entrance examination to Engineering schools (Physics-Chemistry)). She was then accepted in 2012 at Institut d’Optique Graduate School (Optical Engineering School). At the same time she did a parallel of Fundamental Physics bachelor and master at University of Orsay. During this time she completed two internships: a 6 week internship (2013) at the Paris Observatory working on calibration of optical fibers for a telescope interferometer and a 4 month internship (2014) at the Space Telescope Science Institute working on analysis of Hubble Telescope Data to search for planets and dust disks.
In 2015 Elena pursued a Masters degree at Imperial College London in Biomedical Engineering, which included a 6 month research internship working on a nano scale analysis of functional morphology in 3D microscopy data sets of the eye.
Finally Elena started a doctorate in 2016 at Institut de la Vision in collaboration with the French Aerospace Lab in Paris focused on the high resolution imaging of the retina and obtained the PhD degree in January 2019. In January she began a postdoctorate at Quinze Vingt hospital working with Michel Paques and Kate Grieve on the high resolution imaging of the retina that ended in April before arriving to University of Pittsburgh. Her main focus with Dr Rossi's lab was to image ganglion cells using multi offset imaging in the AOSLO system. Now Elena is continuing her project here at the Quinze Vingts Hospital.

This site uses cookies to ensure its proper functioning. It also uses cookies from third party services to provide advanced functionality. At any time, you can choose which services you wish to activate or decide to withdraw your consent.
Customise accepted services
You are free to choose which services you wish to enable. By authorising these third party services, you agree to the deposit and reading of cookies and the use of tracking technologies necessary for their proper functioning. By withdrawing your consent for some of these services, some website features may no longer function.
Website navigation  Read more
The site writes a session cookie to enable it to function properly and to help with navigation. It cannot be deactivated.
Usage: 1 cookie, records the session identifier.
Time to live: The cookie is present during the entire session on the site. It becomes obsolete after 24 minutes of inactivity.
Mandatory
Media Popup
Display videos from Youtube or Dailymotion.
ReCaptcha  Read more
Allows to verify that visitors are humain while submitting forms.
Accept all Refuse all Manage Reload page